I was excited about Astrea V’s bond when its initial prospectus was released on 22th May 2019. At that point in time, I had invested in Temasek’s 2.7% Bond and was ready to sell it in the open market, to buy the upcoming bond issue.

This is not the first time Astrea’s bond was offered to retail investors. Last year, around the same time, Astrea IV was offered to retail investors. I still vividly remember a project I did for one of my finance modules I took in Polytechnic. The project was on a discussion on why Lehman Brothers, among other financial institutions, went bankrupt during the GFC in 2008, and how mortgage backed securities was one of the main culprits of the bankruptcy. With this still fresh in my mind, I told myself to avoid any Asset-Based security product offering.

Asset-backed securities (or ABS) are debt securities which derive their principal repayments and interest payments from a specified pool of underlying assets and their cash flows, according to a defined priority of payments arrangement. They are different from corporate bonds in that, a corporate bond issuer generally derives its principal repayments and interest payments from its underlying business and financial resources.

I avoided Astrea IV when I first heard it was an asset-backed security, to be exact, a collateralized fund obligation. You might be curious as to why I am buying the Astrea V A-1 bond this time around. This is not the second time Temasek’s Azelea issued private equity bond to investors. Temasek launched Astrea I in 2006, which was 2 years before the GFC happened. Astrea I was not severely affected by the GFC and its two classes of rated notes maintained their credit ratings throughout their tenure, and were fully repaid in 2011. This shows that the quality of the portfolio of the fund, and the sponsor’s track record in managing the fund are two important factors to take note. Therefore, not all asset backed security are created equally.

Without further ado, in this article, I will discuss what exactly Astrea V is, and try to answer some burning questions that every investor might have.

What is Astrea V Class A-1 Bond

There are three tranches in the Astrea V PE Bond and only the Class A-1 Bond is offered to retail investors. The Astrea V PE Bond is an asset-backed security backed by cash flows from a US$1.3 billion portfolio of investments in 38 PE Funds managed by reputable general partners. General Partners or GP, refers to the fund manager of the private equity fund who will look for investments.

From the illustration above, Astrea V Class A-1 bond is offering $180 million of the bond to retail investors. The coupon rate for this bond is 3.85% p.a and the interest will be paid semi-annually on 20 June and 20 December yearly. Retail investors will receive an additional 0.5% interest from the issuer on the redemption date if the Performance Threshold is met on, or before the scheduled call date 5 years later.

Even though the Class A-1 Bond matures in 2029 , it has a mandatory call by the issuer that at the end of the years, IF the cash set aside is sufficient to redeem all Class A-1 Bonds AND there are no outstanding Credit Facility loans. However, if both conditions are not met, the interest rate will be stepped up by 1% p.a. or 4.85% p.a. 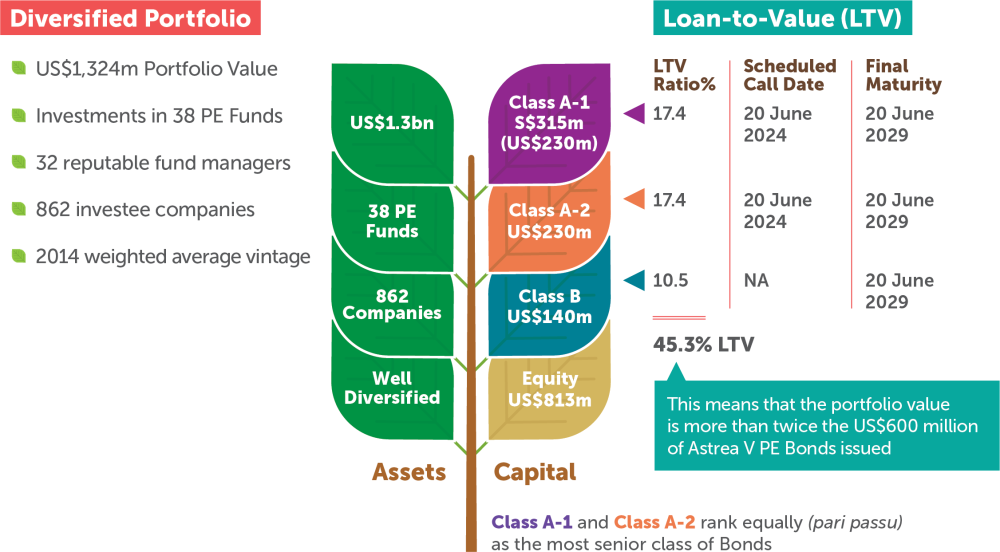 Astrea V Bond’s portfolio is worth more than US$1.3 billion where it made investments in 38 private equity funds  managed by 32 reputable fund managers, that invests in 862 companies. The weighted average vintage year for Astrea V bond is 2014. The vintage year of a fund refers to the first year when PE fund’s started operating. 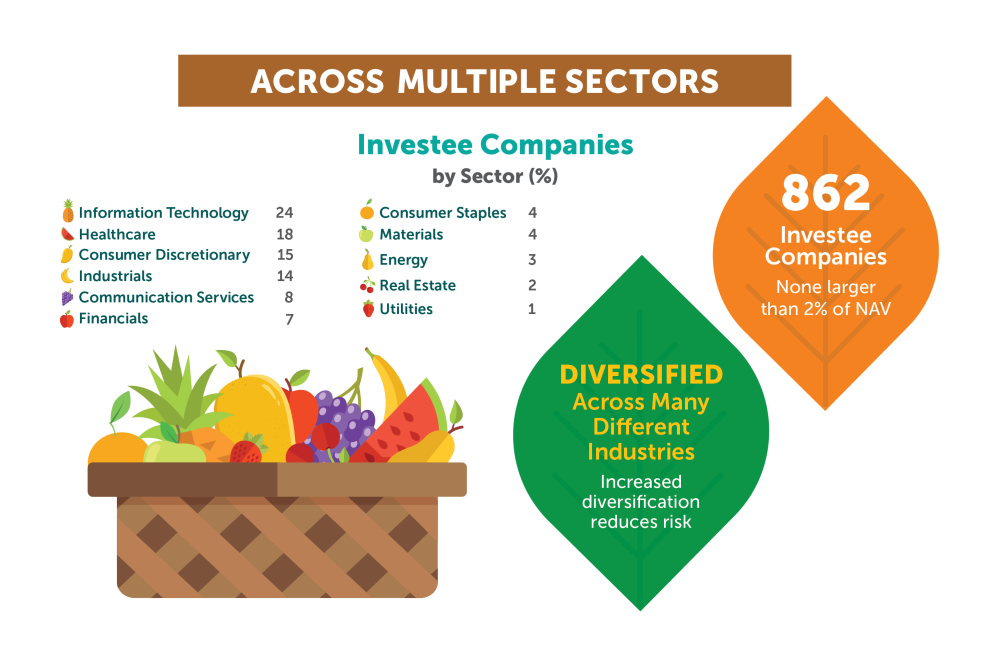 Compared to Astrea IV’s portfolio, Astrea V’s portfolio is more diversified in terms of the number of companies the private equity funds are investing in. There are 862 investee companies in Astrea V compared to the 596 companies in Astrea IV. We always hear people say how one should not put all their eggs in one basket. For Astrea V, none of the investee companies contribute more than 2% of Net Asset Value.  This means that if a particular company is not performing well, the cash flow generated will not severely affect the overall performance of the portfolio.

Before comparing the fund strategy exposure, we should understand what Buyout and Growth Equity means. I have attached the definition and brief explanations which can be found in the Prospectus.

“Buyout” includes the purchase of controlling stakes in the securities of an Investee Company which often results in the PE Fund exercising control over the Investee Company’s assets and operations. Buyout funds sometimes invest in listed companies with the intention of delisting them from a stock exchange in a “take private” exercise.

Company mainly through one or more of the following strategies:

A Buyout fund typically exits an investment by selling to a strategic buyer or another PE Fund.

“Growth Equity” includes investments in companies that are still going through a rapid business expansion phase.

These companies seek capital from Growth Equity funds to expand operations or to enter into new markets. Growth Equity investments typically include the purchase of minority positions in an Investee Company with limited use of acquisition leverage.

Being a minority shareholder, a Growth Equity fund typically has less influence on the operations of an Investee Company than a Buyout fund. However, Growth Equity funds builds in downside protection through a number of methods, such as investing in stock with a liquidation preference over the stock held by the controlling or founding shareholders,  and obtaining representation on the company’s board and minority shareholder rights such as the approval of operating and capital budgets, senior management changes, mergers, acquisitions and divestment activities.

As they have limited influence on the management of an Investee Company, Growth Equity funds typically prefer to invest in companies with strong management teams and implement incentive schemes to align the interests of management and investors. Growth Equity funds generate returns by capitalising on the growth of the Investee Companies. They typically exit an investment by selling to a strategic buyer or another PE Fund, or by listing the company on a stock exchange through an IPO.“

Comparing Fund Strategy Exposure of Astrea IV and Astrea V, there is a reduction in percentage of Buyout exposure in Astrea V than in Astrea IV. Astrea V’s buyout percentage stands at 81% compared to 86.1% in Astrea IV.

The high buyout percentage in the portfolio was preferred by the management because buyout funds’ general partners have higher control in the investee companies. In the event of a financial crisis, they have the power to control and manage the company to prevent their investee companies from performing badly which will affect the cash flow generated.

Over the years, the net cash flow will become positive when the fund manager decides to sell and make an initial public offering for the investee companies to make a profit. With this understanding, we can conclude that the higher the weighted average fund age, the better it is. Therefore, comparing weighted average fund of Astrea IV and Astrea V, the figure stands at 5.4 years for Astrea V and 7 years for Astrea IV. 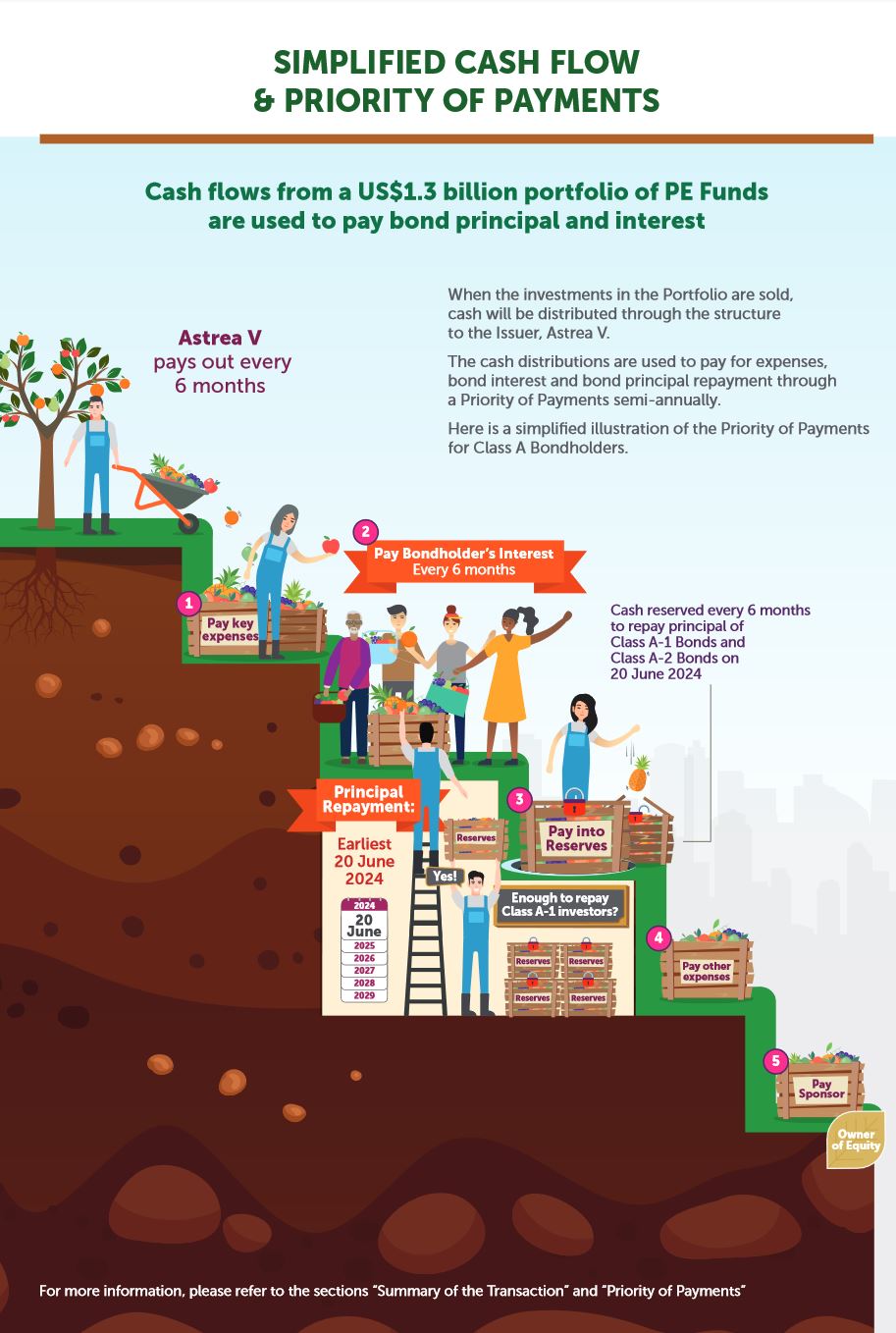 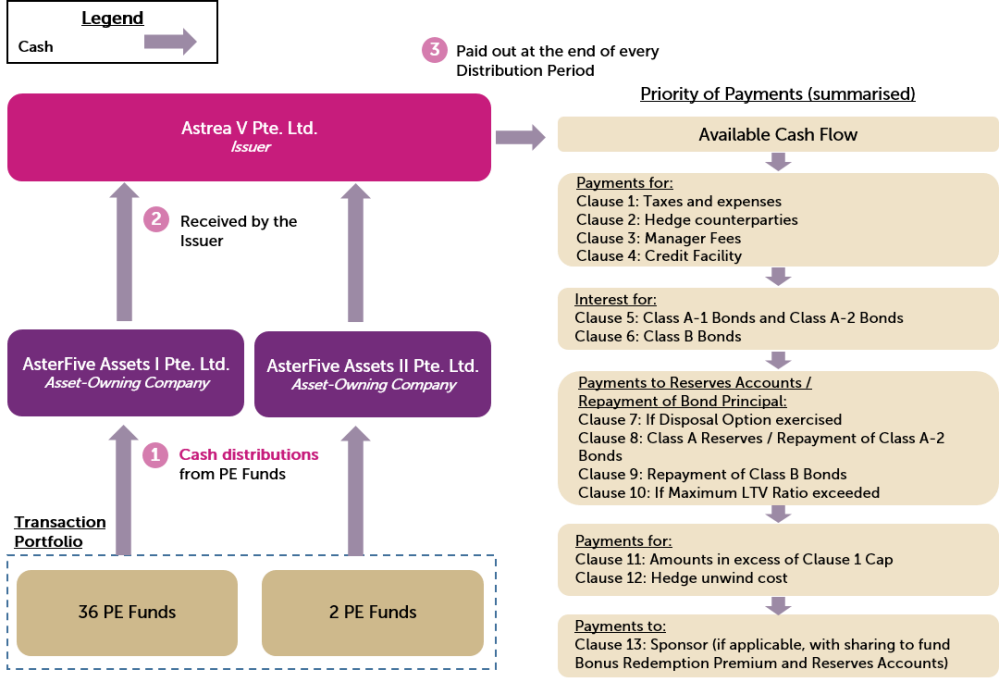 The two illustrations show the priority of payments after Astrea V receives cash from its private equity funds when their underlying investments are sold. This is self-explanatory and therefore there is no need of further explanation.

I guess the two burning questions every investor wants answered including me is:

Before I answer the first question, there are safeguards or mechanisms that are present in this bond that helps reduce the risk of default from Astrea V.

According to the prospectus, it states that 50% of cash flow meant for sponsors will be transferred to the Reserves Account so long the Performance Threshold (US$406.6m) is met. This is to ensure that reserves are built up quicker than usual, to ensure that there are sufficient reserves to call back the bond in 5 years. When the bond is successfully called back after the fifth year, the sponsor sharing will come to an end.

When the LTV exceeds 50% on any distribution date, the management has to allocate remaining cash flows to the reserve accounts to deleverage the bond.  Leveraging is a double edged sword, with Maximum Loan-to-Value ratio of 50%, it limits the bondholders’ exposure when portfolio valuation declines.

When there is a shortfall in cash flow generated by the investee companies, DBS Bank and Standard Chartered Bank can step in to fund taxes, administrative expenses, management fees, hedging-related payments and interest on the class A-1, class A-2, class B bonds and capital calls in the event. However, credit facility cannot be used to pay for the principal amount of any bonds.

What if the cash flow generated is not sufficient enough to pay interest for Class A-1 bond and other commitments such as Class A reserves?

In an event that Astrea V does not have any sufficient cash to pay interest, the Credit Facility will help to cover the shortfall. We should also look at the Astrea IV performance as shown below.

What if Astrea V is not able to pay back or default on our principal and interest payment on Maturity Date?

Fitch has done extensive stress tests on Astrea V bonds. It did Cash Flow Scenarios Analysis where it used historical data that matched the characteristics of Astrea V’s portfolio. In addition, it ran a stress test where it assumed that the fund performance has deteriorated to the 4th quartile level, which is the worst case scenario.

The result shows that despite the fact that the fund performance has deteriorated to the 4th quartile level, class A-1 bond is able to make timely interest without defaulting. Class A-1 bond is also able to successfully call back the bond on its scheduled call date. It also has enough cash coverage between 1.8x and 2.7x when calling back the bond.

You should be assured that the probability of Astrea V defaulting is close to zero with all the safeguards that are implemented in the bond. However, I feel that the Astrea IV is far more superior than the Astrea V bond in terms of the percentage of the largest fund strategy exposure, credit facility and weighted average age. Having said that, there is no need to be worried about the differences, so long that the Astrea V bond is able to perform as what the stress tests suggest.

As of 12 June, the Ask Yield to Maturity is at 3.465% which is lower than the yield offered by Astrea V of 3.85%. This is the case if you are holding it till maturity. However, if you do not intend to hold till it matures, you will still be receiving 4.35% coupon rate. The problem we are facing is the high ask price for Astrea IV. In view of this problem, it is advisable not to chase for a higher coupon rate as the upfront cost of buying into Astrea IV is much higher than buying into Astrea V from IPO.